Difference between revisions of "Scripting/LUA"

Space supports two separate scripting runtimes - Lua and C#; for most uses, we strongly recommending using the Lua variant, as it is cross-platform compatible. (C#/.NET only work for Standalone clients). Our Lua runtime runs optimally in all platforms including WebGL; and utilises the same API as the C# variant.

Note: We had originally announced JavaScript as our cross-platform runtime, however after implementation we've found our Lua runtime performs considerably better and with greater stability.

Notes on the Lua implementation

Creating a Lua Script in Space

Note: This documentation refers to the first fruits of Lua scripting in Space, and as such, it and everything it describes is subject to change at just about any time

Here's the view in the inspector pane of the GameObject to which the example script is attached, along with a particle system: 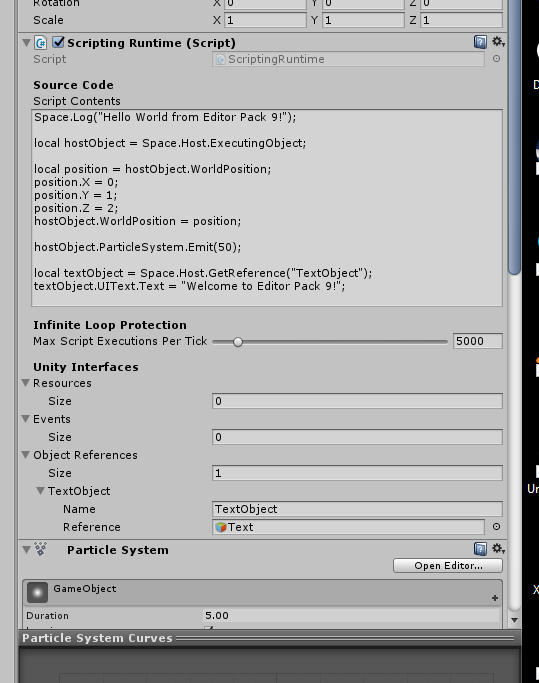 That's the entire script in the source code box, it's really quite simple.

- The first line writes a text message on the console.

- The second line creates a script-local reference to the host object (the GameObject to which the script is attached).

- after that, the attached particle system is invoked with 50 particles.

- That last line sets the text value to be rendered on the canvas in the hierarchy, producing the 'Hello World" message as 3D text rendered in the scene.

Hopefully this will be a sufficient 'jumping off point' for those of us eager to get busy with scripting interactive objects for Space.

Following is an additional example, scraped from the Space Beta Tester's skype channel.

- The next line uses the SScript class' 'find' method directly to rename the directional light in the scene.

- The next three lines instantiate a local reference to a game object named "GameObject", then invoke methods on that instance to subscribe to it's events. An appropriate message is written to the console in the interest of instrumentation.

- The next four lines are quite interesting, and provide an excellent example of taking a reference to an anonymous function. The anonymous function is declared typographically starting with the text 'function()', and ending with the text 'end'. The function logic is in the body, and in this case produces text output indicating that the event fired and was serviced, and the time and mouse position are logged as well.

- The next three lines register the method, wiring it up to the 'OnMouseDown' event (mouseclick), write to the log confirming the event method has been registered, and then manually invoke the event.

- The final line adjusts the range of the light in the scene. Not real sure where Adam was headed with that, but this an example and that's what it does ;)